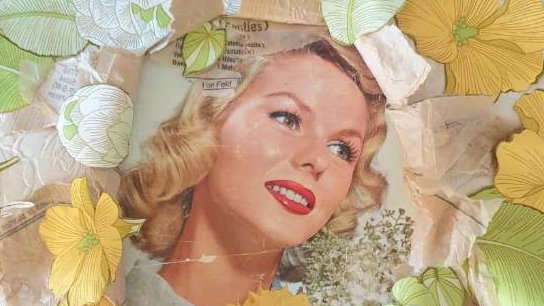 Riggs is fascinated by portrayals of femininity, particularly, the darker undertones of historical and literary depictions. Through ongoing research and practice, she has been exploring the aesthetic of femininity from a critical perspective, attempting to recognise the agency and identity inherent in women who have traditionally been sidelined and objectified. This theme developed simultaneously in the works of Riggs, using collected vintage wall papers, calenders and magazines for women, whose ideas came together during her residency at the Fremantle Arts Centre.

The exhibitions aesthetic is inspired by a recent work that Riggs has created. Riggs has collected pastel pink, shimmery wallpaper and hung it from the walls like a tapestry. She has embellished the tapestry with vintage birthday cards and magazines targeted at young women and girls, which are revealed as the wallpaper is peeled away from its surface, creating a collage that spills out of the wall – a secret world that is found behind the wall. At first glance, the work appears to be a testament to traditional feminine beauty. However, as you look closer, elements of decay are unveiled, and the cracks appear in the beautiful facade. There are bugs on all surfaces. There is a sinister male gaze peering through, and a unsettling caption, ‘dad’, hovering in the space. For this exhibition Riggs will display this series of wallpaper collage and sculptures created from discarded, vintage objects.

Through an examination of the underlying assumptions within the feminine gothic canon, this exhibition will strive to re-introduce depth and recognition to female characters and “female values” that are all too often cast aside, dismissed, or oversimplified.